Helping the 96% who failed this wine test

Study after study shows most people can’t tell wines apart by price alone. Expensive wines in a blindfolded test taste usually attract the same level of appreciation as those that are a fraction of the price.

We at Vinloco live and die by this observation. That’s why we created our app to help people buy the best value wines – in other words, the best quality wine for a given price. Vinloco helps people look past pretty labels, dodgy sales advice and in-store marketing gimmicks to choose the best wine whatever their preferred price point.

But most people still have a hard time believing that a wine costing $50 won’t taste significantly better than one costing half the price – or even a fifth of the price.

So we put them to the test. At the recent Australian Wine Industry Technical Exhibition in Adelaide, we asked 70 people who dropped by our stand to taste four different wines and try to match each one to a price. All the wines were 2013 cabernet sauvignons that had won gold medals from an Australian wine show last year. The only difference between the four, apart from origin, was the price with the bottles stepping up in $5 increments from $10-25.

How did our testers go?

Distribution of guesses trying to match a wine and a price

The results of the guesses are shown above. More than twice as many people who correctly picked the dearest wine thought it was the cheapest while most people agreed the second cheapest wine was actually the dearest. As the pie chart shows below, three quarters of all people taking the test got none or just one of their guesses right. 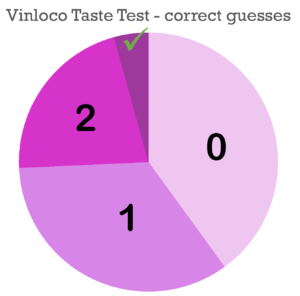 The lesson is this: don’t pick wine by thinking you are going to get a better one if you pay more. Usually you won’t. And, furthermore, there’s a better than even chance you won’t like the dearer one any more than the cheaper one if you were to taste them side by side.

There are lots of reasons to buy more expensive wines such as you want to impress someone, you are collecting them, you like a better looking label or you like the idea of grapes picked under a full moon at midnight. Some are even genuinely good wines. But most industry insiders will tell you in a candid moment that there is no reason to pay any more than $15 for a top-quality wine of any variety in Australia.

As if to prove the point, the Royal Queensland Show this year bestowed its top rating on Australia’s most competitive variety – shiraz – upon a wine that one retailer was selling for just $10 a bottle. The second placegetter with one point less usually sells for about $23 a bottle while the third placegetter, made by the same winemaker, got the same score despite being priced three times higher at $75 a bottle.

The Sydney Royal show was no different. The cheapest three of the labels that claimed the show’s 33 gold medals for shiraz can be bought for $41 combined while you’d pay more than eight times that amount for the most expensive three ($335). The wine with the highest score can be found for just $18. The cheapest sells for less than $12.

If you want to know the best wines coming on to the shelves this wine show season, follow us on Vinloco. We do all the hard work matching scores with prices so we can tell you how to buy the best wines for your money.

< Back to Blog
Top